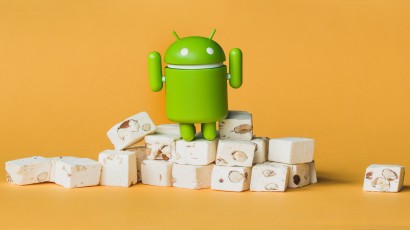 The events leading to the final release of Android 7.0 Nougat have been something else — from the multi-faceted super early Developer Preview releases to the public naming of Android N (Nkatie Cake over Nougat any day), this has been the most ‘exciting’ release yet. We laid our hands on the OTA file and flashed away some hours ago! After using Nougat for some time, these are all the new features we’ve found.

Remember the Egyptian hieroglyphs? Yes. In the early civilization era, people used to communicate with signs and symbols. Now, thanks to the over 1,500 different signs and symbols (called emoji) in Android Nougat, you can communicate like your prehistoric ancestor in grand style! Android 7.0 Nougat’s emoji set features the more racially diverse set of characters with a more realistic sample of colors to represent the various races in the world in addition to 72 new emoji from Unicode 9.0. The yellow faces have however not been updated.

Quick Settings made a debut in Android 4.2 Jelly Bean, making you toggle between settings such as WiFi, Bluetooth, Airplane Mode and Orientation. This control has previously been uneditable until now. Android 7.0 Nougat gives you the power to edit Quick Settings Control, something that should have been the norm right from the onset.

Multiwindow support is not new to Samsung as their Galaxy Note series has had this feature for years. But that is understandable — their enormous size allows for side-by-side app multitasking. Multiwindow support made a debut in Android some time back but it was tucked so deep in the system you had to jump hurdles and cross rivers before accessing it. Now that feature is open for all.

You know, when you’re using Twitter and you get a WhatsApp notification, you have to minimize Twitter, open WhatsApp, reply, minimize WhatsApp and then open Twitter again! Well, that stops with Nougat because with Direct Reply, you simply drag down your notification panel and reply that notification!

The Settings menu has been redesigned to save you some taps by showing you relevant information and summaries from each subsection. Also, you can quickly jump into any sub-Settings menu by swiping right and tapping on them.

Ever since Android 5.0 Lollipop, Android has sought to actively improve battery consumption through a series of optimizations known as “Project Volta”. Among its changes were a new battery saver mode, job scheduling APIs which can restrict certain tasks to only occur over Wi-Fi, and batching of tasks to reduce the overall amount of time that internal radios are active. They took this a notch higher in Android 6.0 Marshmallow with “Doze”. And now on Nougat, they are promising an even better management.

Save data by preventing apps from accessing data while running in the background.

In addition to editing font size, you can now take more control over your device by increasing or decreasing icon sizes to match your preferred font size, much like DPI editing.

Have you ever missed an alarm or a very important notification just because you did not unlock your device after a restart? Before Android 7.0, apps cannot function normally unless the device is decrypted ie. credentials entered to unlock the device. With the introduction of Direct Boot into Nougat, apps can access specific data and perform some essential tasks even on an encrypted device. App developers will have to register this component in their apps to make use of this Nougat feature.

We will continuously update this post as we come across more changes
Featured image credit: androidpit.com