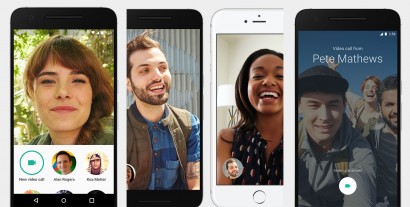 When Google Duo, a video chat app was announced earlier this year at the Google I/O, I muttered to myself that the world does not need another video calling platform especially given the fact that Google Hangouts allows for video calls. After a long wait, the app has finally been published in the Play Store and I’ve been forced to swallow my words.
Duo is simply elegant with an overly simple and intuitive user interface devoid of many buttons and ‘features’. It is essentially the video call component of Google Hangouts that has been refined and neatly polished. The unique selling point of Duo is its treatment with regards to poor mobile data and WiFi quality. Duo will intelligently switch from WiFi to mobile data when your connection is choppy. Also, it smartly pauses video transmission and switches over to voice only when your mobile data quality is poor.

What differentiates Duo from other video chat apps is the way the app handles video transmission — rather than ending transmission or transmitting with frequent breaks, Duo slowly reduces video quality to match your current network strength. During my tests, I found the app slowly graying video transmission when my network started hiccuping.

Google took a page out of WhatsApp’s books and based the app on your phone number so you can easily connect with your contacts who have the app. There is no need for usernames, PINS and passwords. Similar to Google Hangouts, Duo allows calls between Apple and Android devices with just one tap, something we are yet to see in Apple’s FaceTime.
I cannot write about Duo without mentioning ‘Knock Knock’. When ‘Knock Knock’ is enabled, you allow the one you’re calling to see a video of you even before they answer! This is useful in compelling contacts to pick up your calls if you are seen to be in an interesting background.

Duo’s simplicity means the app is devoid of features such as group calling and text messaging (I was redirected to Google Messenger when I tried sending a message during my tests on the app). I expect Duo to get its desktop app and a Google Chrome extension in future though.
If you want to give it a shot, head over to the Play Store or App Store and install the app. Don’t forget to invite your contacts to join you. Alternatively, you can sideload the apk from apkmirror.
Let us know what you think in the comments section.
Featured image: xyztimes.com