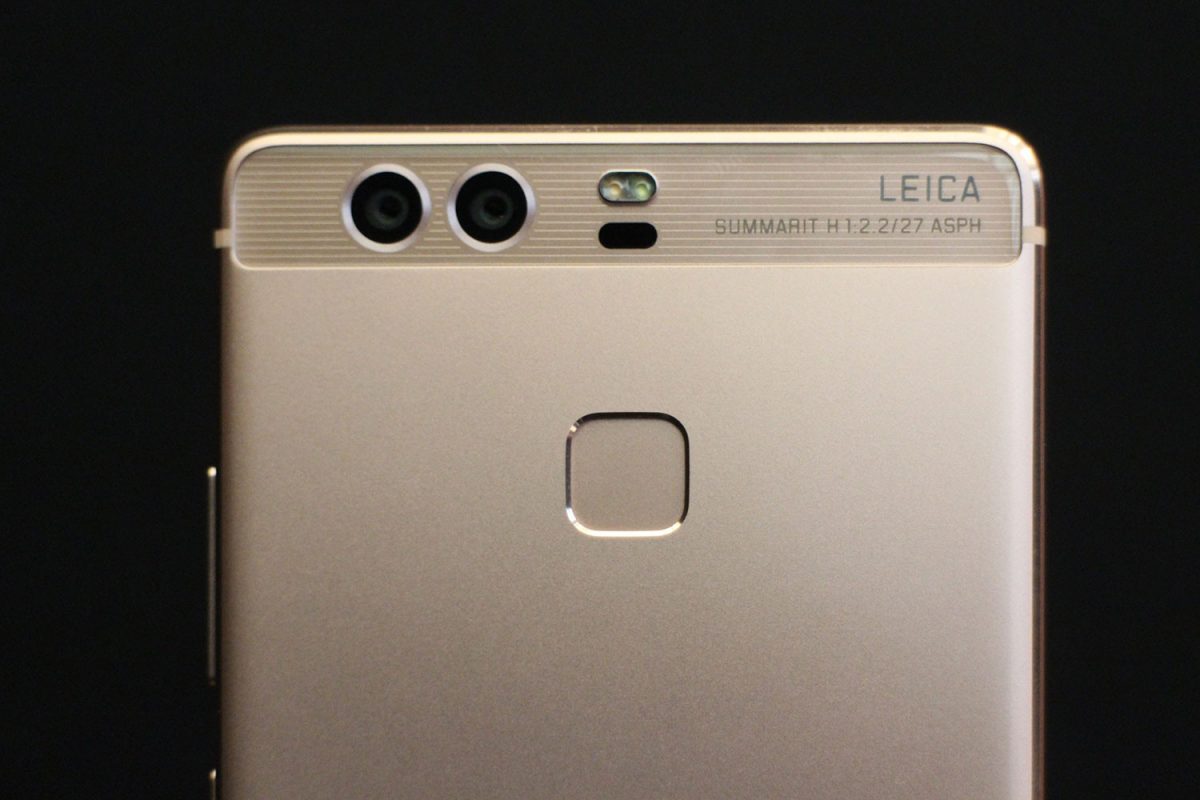 Huawei’s flagship device, the Huawei P9, was officially launched in Ghana on the 14th and 15th of May. The event, taglined “Reinvent Smartphone Photography” allowed fans and enthusiasts to pose for photos with EL, the 2016 VGMA Artiste of the Year and the sassy Deborah Vanessa.
I got my hands on the device for a few hours and I can tell this Chinese giant is ready to become a supergiant. Let’s jump straight into the review!

The phone is lightweight, slim, and showcases a fine-patterned aluminium unibody. The Corning Gorilla Glass 4 adds a glossy finish to the front of the phone. The form factor is predominantly rectangular, with very subtle chamfers.

The dual camera and dual LED flash are at the back of the phone and do not protrude at all. The fingerprint scanner sits just a few centimeters below the flash. There are also those plastic bands — similar to the ones we see on the HTC 10 — to accommodate the device’s network bands.
Much like the Huawei 6P, both the volume and power buttons on the P9 are located on the right edge of the phone, with the power button rigged to differentiate from the volume rockers.
The P9’s speakers are located at the bottom, with the USB Type C port sitting between two pentalobe screws. The standard 3.0 mm headphone jack is found here as well. This portion of the phone has an uncanny resemblance to the 6th iteration of a device made by a very popular equipment manufacturer I will not name. *Sips Apple juice*

There are two card slots on this phone. The European model, which has 32 GB internal storage capacity supports micro SIM card and an SD card while the Asian model with 64 GB will allow for dual micro SIM usage with no support for a micro SD card. SIM 1 is 2G / 3G / 4G capable while SIM 2 takes only 2G.

The phone is very fast and very responsive. It was very easy to switch between apps, and general usage seemed snappy. I could not install any third party apps to run a full test but I guess the interplay of the colossal 4 GB RAM and the octa core configuration should make the performance great. As such, I expect the P9 to handle all resource-intensive apps thrown at it with little to no sweat at all.

I spent only a few hours with the phone and therefore have yet to form an opinion on how good or otherwise its battery is. But what I can say is, theoretically, the performance of a 3,000 mAh battery on a 1080p 5.2” screen should just be slightly above average (4 hours 30 minutes of screen usage from 100% charge to ~5%). I cannot make any comments about its stand-by time but since it ships with Android 6.0 Marshmallow, Project Doze might help prevent battery drains when the phone is idle.
There’s also an advanced Battery Manager which is supposed to help with power conservation. You can lower the screen resolution from 1080p to 720p to help save power. The Battery Manager can also analyze your phone and present you with a list of power hungry apps so you take away their freedom to drain your battery.

Yes. The camera.
The camera is the biggest selling point for the P9. The cameras were co-engineered by Huawei and Leica, a German supergiant in the Photography industry. The hardware specifications look very solid both on paper and in reality. In addition to this, the P9 has a powerful post-image processing software to “Reinvent Smartphone Photography.”
There are two Leica certified rear cameras and two LED flash to brighten shots up. This is not the first time we’ve seen two rear cameras on a smartphone. The dual rear cameras on the HTC One M8 helped with depth perception but on the P9, in addition to depth perception, the dual cameras help capture more detail.

During a shot, one of the two cameras captures RGB (color) while the other captures monochrome (black and white) simultaneously. After this is done, the software does its magic and merges the two photos into one great shot. According to Huawei, this improves contrast by over 50%! The camera also automatically blurs the background and focuses on the object of interest to give it that DSLR-esque effect. After taking a shot, you can refocus on another object and those edits will be saved as another photo.

With manual mode, Huawei gives you more control over the camera. This should come in handy for all the 2 million (and counting) ‘professional’ Ghanaian photographers on Instagram. If you’re a novice like me, there are automatic settings you can count on. You can customize aperture from f/0.9 to f/16, ISO and shutter speed. The ability to regulate the camera’s aperture allows the P9 to take excellent shots in low light and high light environments. The larger the aperture, the more light gets into to the camera shutter and vice versa. If you are in a well lit environment, you can lower the aperture all the way to f/16 to enhance picture quality. Conversely, the camera’s aperture can be turned up to f/0.9 if you need to allow more light in.
There’s also the option to add filters to the camera so you can select which filter best suits the shot, even before you capture it. Once again this has an uncanny resemblance to the … never mind. There are some promising camera modes such as HDR, Timelapse, Monochrome, and Watermark; but unfortunately, I could not try any of them out.
I love the 8 MP front facing camera too. Even though ‘Beauty Face’ edits shots in a very weird way, you can turn this off to get ‘accurate’ selfies. One feature I found interesting was the fact that you can actually smile to capture shots. You can also touch the fingerprint sensor to take selfies.

Huawei P9 runs on a heavily, heavily, heavily skinned stock Android UI called Emotion UI, or EMUI. The icon scheme is a miss if you ask me because it kinda makes non-Huawei icons look very weird. There’s no app drawer on the P9 which means all apps are just displayed on the home screen.

Overall, the software feels like a muted version of Material Design. I like the way the predominant color on the screen blends with the notification panel and how the icons in the notification panel become dark when the dominant display color is white, something Google is yet to properly implement on stock Android.

Another notable mention is the LINK+ package, which comprises Wi-Fi+, Signal+, and Roaming+. Wi-Fi+ automatically switches to mobile data when you lose Wi-Fi connection. In addition to that, it also automatically connects to the strongest Wi-Fi network available. Signal+ relies on the P9’s virtual triple antenna to receive signals from all directions while Roaming+ is designed to let you quickly find an available roaming network.
I tried to find out from the Huawei reps present how Signal+ works but they started talking about the dual camera after they asked me to repeat my question. I should probably have asked to speak to an engineer instead.
Just when I thought Huawei had done a good job keeping bloatware at a minimum, I opened ‘Phone Manager’ and this is what I saw:

2015 was a great year for the Chinese manufacturer. Huawei manufactured the hardware for the Nexus 6P which is an excellent device by all standards.
According to the IDC, Huawei was the biggest winner in the Q4 2015, with a year-over-year growth among the top five vendors at 37%. Huawei is also the fourth mobile phone vendor in history to ship over 100 million smartphones in a year (preceded only by Nokia, Samsung and Apple). Of the key brands originating from China, Huawei has consistently expanded its presence and share on the back of affordable handsets in emerging markets, combined with increasingly competitive flagship models.
Huawei seems very poised to succeed even more in 2016 and grab a chunk of the market share owned by Apple and Samsung.
But EMUI needs to be reworked.
Special thanks to @lordtee, @ElectroMirror, @AwesomeCurtis