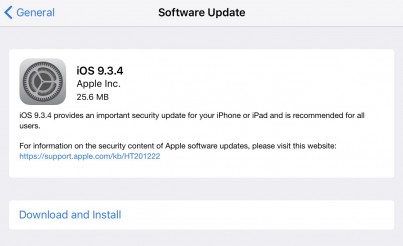 Apple again has released an update to devices compatible with iOS9: the iPhone 4S and newer; iPad 2 and newer; all iPad Minis and iPad Pros; and the fifth- and sixth-generation iPod Touches. They are calling it an “important” security fix and relates to a patch that fixes memory corruption problems on the software.

To get this update, locate Settings -> General -> Software Update. Note that this may require you to connect to a wireless network or iTunes.
Apple is set to release the much awaited iOS10 this fall — we bet by mid-September. We expect iOS 9.3.4 to be the last update to iOS 9 before iOS 10 appears in its glory.
For more on iOS 10 and to refresh your memory on the WWDC 2016 Keynote, read this article -> WWDC 2016 Keynote Roundup: All The Innovations
Featured image credit: idownloadblog.com