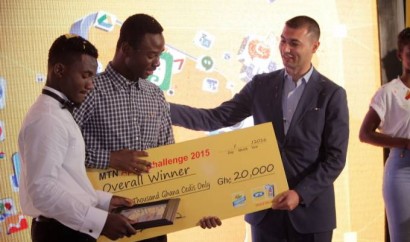 Wheelo, a game developed by Agoru Studios, was crowned the ultimate winner of the recently ended MTN Apps Challenge Version 3.0 Competition in Accra. The group also walked away with a cool GH¢ 20,000 (US$ 5,200) cash price.

We had the honor of interacting with Kwaku Tabiri, the lead developer of Agoru Studios. Here are some highlights.

Kwamina Arthur: Hello Kwaku! Glad to have you! All well?

Kwaku Tabiri: Yeah, Kwamina. Thanks for hosting me.

KA: The pleasure is all mine. Now it’s time to bombard you with my questions.

KA: I’m not promising anything. All right, first question, when did you start coding?

KT: My first encounter with programming was when I was in junior high school. I went to EPP Bookshop at Achimota to buy a book with my friend. We saw a book on the shelf by D.S Malik on C++ and I bought it. It was a hobbyist activity initially, but I took it a notch higher in my first year at the university learning C#, Java, Android and other languages at the time.

KA: How do you manage your time as a student and an app dev?

KT: Glad you asked. It’s not easy and often times, there is some imbalance. It is difficult combining studies and creating a product at the same time. However, with planning and a few sleepless nights, anything is possible.

KA: Good to know you don’t spend your sleepless nights watching series! I remember I didn’t sleep for days when binge-watching Breaking Bad. Anyway, I realized you’re offering Aerospace Engineering in school; how did you end up as game developer?

KT: I get asked this a lot. I’ve always loved making and modifying games. I was exposed to computer games as a young boy, I think I was 5. However, I’ve also loved flying things since childhood — aircraft and rockets. So to explore both interests, I study aerospace, but my business is game development and that works for me

KA: Pretty neat. So considering the number of Ghanaian developers that have penetrated the global market, the limited access to resources and support, is it exciting to code in Ghana? Do you face a lot of challenges? What are some of them?

KT: Yeah, you’re very right actually. The thing about coding is that it has its own inherent excitement. That feeling when you squash a bug after sleepless nights is priceless. But I cannot specifically say Ghana makes it any more exciting, except when it comes to the fact that we have more societal problems to be solved with coding. That makes it an interesting challenge. I know you’ve probably heard this a million times but erratic electricity supply and unreliable internet connectivity are very serious problems for me. In any case, access to these come at a high cost.

KA: Yeah, thought as much. Let’s talk about languages. I speak English and Fanti. How many languages do you speak?

KA: So, moving on, apart from the app that won you the challenge, do you have other apps and projects?

KT: Indeed I do. Prior to the challenge, I developed JetPackGuy which is also available on the Play Store. I also have a couple of other projects that never got published. I believe this is not unique to me; it’s common with all other developers

KA: All right. What are some of your future plans with regards to app development?

KT: Well, after the challenge, a lot is evidently expected of us and we have every intention to continue and complete Wheelo, making it of the best standard we possibly can. Hopefully we should gain some international traction with it and get our name out there. We are soon going to feature on Made With Unity where we will tell our story so that should help.

KA: Yeah, it will be nice seeing Wheelo listed on the home page of the Play Store.

KA: Tell us about Agoru Studios

KT: Agoru Studios was formed by Samuel Boadu, a colleague, and I. We created it while working on Wheelo. It was to be the mother of all games we created. We want Agoru Studios to be among the AAA game publishers in Africa and the world at large. Africa has a lot to offer and  with a rich history and an extremely diverse and saturated culture, we believe it’s time the world knew about this. Agoru Studios was made to be the wheel driving this change

KA: All pun intended right? “…wheel of this change” with Wheelo. Haha. When did you decide to participate in the Challenge?

KT: I first heard of it about a year ago through a friend, Wahib, who at the time was a participant himself.

KA: Oh I know Wahib. Small world, huh? So what inspired you to get on board?

KT: I took inspiration from my good friend Wahib, of course the grand prize and the opportunities the challenge offered. The possibility of earning income by doing something I love just whet my appetite real bad.

KA: How did your friends and family support you throughout the span of the competition?

KT: Family… they kept me alive, physically and mentally, most of the development was done during the school period, so they supported me and gave me all the motivation I needed to continue. Friends… they kept me focused. The look of elation, surprise and pride I saw in their faces pushed me to continue and drove my passion to create a great game…and to win.

The look of elation, surprise and pride I saw in their faces pushed me to continue and drove my passion to create a great game…and to win

KA: Aww. Any memorable stories from your time on the program?

KT: There was a time I decided to give up. I was fed up with the frustrating code errors and frustrated by thoughts of possible failure. There was an error that kept appearing in the game, one which early users will be familiar with — a big hole kept appearing where a path should be — and that broke the game entirely. It completely shattered the user experience and lost us a lot of users and supporters. Great joy came to me when one restless night, as I was “semi sleeping” and “semi thinking” about the problem, the solution hit me! I immediately implemented the change and went back to sleep…I slept like a baby and all the users were happy with the fix. It was a happy day for me.

KA: Let’s be honest here, did you think you were going to win the Challenge?

KT: Nope, definitely not after seeing the work of our competitors and watching an exposé on proper game design. Comparatively, our product had a long way to go, and perhaps we weren’t ready. I was never completely confident about victory until it was announced. I was simply grateful.

KA: So which of the competitors did you think was gonna win?

KT: I’ll say Ato and his team. They created a platformer game that I enjoyed playing a lot. It was a very well made game and it frightened me.

KA: Oh I see. I hope you didn’t spend more time playing that game than yours. Now let’s talk about the cash, the money. How will you spend it?

KT: We are definitely not going to have a party. We will invest in Agoru. We intend to get some hardware we sorely need; a MacBook Pro, a Wacom Cintiq 13HD Graphics Tablet and some others we rely on in our creative process. We will also spend a portion on advertisement, employing new artists and registering our company.

KA: Oh, there goes any hope I had of being invited to a party.

KA: So about Wheelo, when did you develop the concept?

KT: The concept was developed last year. After seeing the ‘Chorkor drift’ meme making rounds on social media, we decided to model a game based on that concept

KA: Considering at a point you had some second thoughts about your app, why do you think you won?

KT: Yeah, my team and I didn’t just stop at the second thoughts. We went wild with our development; we did our very best to use the bleeding edge of mobile technology which we believed at the time was Virtual Reality (VR). The game has a VR mode we employed to increase depth and immersion of the racer experience. We currently use Google Cardboard which we hope will be more available to Ghanaians soon and we have plans on catalyzing this change

KA: Okay so how does Wheelo fit in MTN’s goal of using tech to promote human development?

KT: The game’s primary concept is to remind people of indigenous African games we’ve quickly lost touch with. I believe referencing and promoting culture with the game as a platform fits perfectly into their vision.

KA: Yeah, I see what you mean. Will Wheelo be on other platforms apart from Android?

KT: Yeah! iOS, Windows, Amazon AppStore, and any other platforms that we can reach.

KA: Good going! Any last words to wrap up with?

KT: For anybody that may want to do something daring or new, I saw a quote from Stanbic bank; self-belief is contagious, start something, Prosper.

KA: All right Kwaku, many thanks for sharing your time with us.

KT: It’s been a pleasure