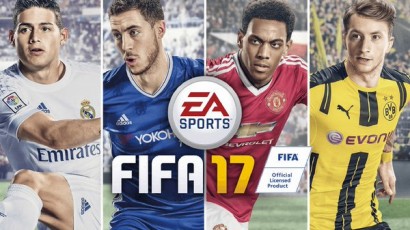 It’s the season of announcements. Google had its I/O late last month; Apple held the WWDC a few days ago. Well, over the last few days (June 12 to 16), the Electronic Entertainment Expo (E3 Expo) has been running and for gamelovers, there’s a lot to expect from your favourite game corps this year. Giants corps like Microsoft, Sony and Nintendo have all featured in this year’s E3 Expo and made announcements on their releases for the year. Let’s look at FIFA 17!

This game promises to be all sorts of exciting. With the release date slated for September this year, game freaks can’t wait to have a feel of it. EA Sports announced that the new game is powered by Frostbite, a new engine that has been used in other EA games like Need For Speed™ and Battlefield™. EA ditched the EA SPORTS IGNITE platform used in FIFA 16 and earlier versions in favour of the new technology to enable its developers produce a truly world class game. One main reason was to leverage the developing team’s ability to develop the new cinematic story mode on FIFA, the Journey (more on that in a bit).

EA also has introduced some more real life features in the form of locker rooms, team planes and tunnels to enhance user experience. These finer details were not available in earlier iterations of the FIFA series. Thanks to Frostbite, game enthusiasts will get enhanced graphics with crisp pictures and and all the depth and emotion one would see on the football pitch.

The cover for FIFA 17 features Real Madrid’s James Rodriguez, Manchester United’s Anthony Martial, Chelsea’s Eden Hazard and Borussia Dortmund’s Marco Reus. These footballers were more actively involved in the development of the game than just being poster boys. These four amazing players were used for performance capture and acted as consultants during the development of the game.

Below is a snapshot of the updates introduced by EA into FIFA 17:

The 2016/2017 Premier League season may be the most intriguing season yet. With the likes of Antonio Conte, Pep Guardiola and Jose Mourinho joining Arsene Wenger and Jurgen Klopp in the EPL, it’s refreshing news that FIFA 17 will have Premier League managers featured in the game. You won’t have to wait for a matchday to see Jose and Arsene dish it out to each other

The developers of FIFA 17 have injected some flexibility in set piece taking. Players can personalize how free kicks, corners and penalties are taken. For those who specialise in all sorts of things on FIFA, you may want to consider taking a course on set pieces soon.

My pet peeve with earlier versions of FIFA is the runs players make off the ball. It’s annoying when your player doesn’t make the right movement in order for you to pick the right pass. Hopefully with the new game, this wouldn’t be much of an issue as the brand new system ensures constant spatial analysis and enhanced movements, readings and reactions.

There is a host of new things you can do from an attacking point of view on FIFA 17. That’s the best part of the game for most people. The additions to FIFA 17 open players up to new ways of finding the back of the net

Last two seasons, Harry Kane burst onto the scene in the Premier League doing some exploits. He repeated that feat last season and secured his place as Tottenham Hotspurs’ number one striker. Anthony Martial, Marcus Rashford and Delle Alli are even more recent examples of new players generating excitement in football today. EA Sports decided to serve game fans something delicious in FIFA 17. With the newly introduced cinematic story mode, which EA calls “The Journey”, you are going to have the chance to live the story of a rising football star in the Premier League. Alex Hunter is full of huge prospects and your decisions on and off the field will determine how far he goes in his career. EA says “it’s a cinematic world informed and influenced by real players, personalities, locations, and events that take you places you’ve never been and bring you experiences only available in FIFA 17”. The story of Alex Hunter is based on true life experiences of players like Harry Kane (Story consultant and performance capture), Anthony Martial, Eden Hazard, Marco Reus, James Rodriguez (Authenticity Consultants and Performance Capture), Marcus Rashford, Delle Alli, Reece Oxford (Authenticity Consultants) who have all at a point been touted as huge talents in the footballing circles. The writer and story consultant for “The Journey” is Tom Watt who ghost-wrote David Beckham’s autobiography, My Side.

Well I can’t wait for the release of the game. If you are like me, I’m sure you are itching too. September is coming.