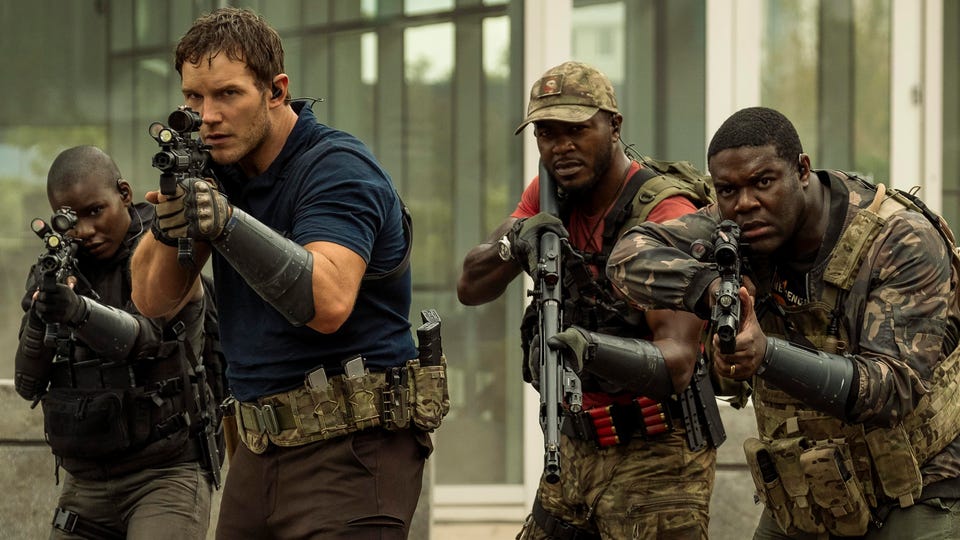 It is not uncommon these days to see streaming services cough up originals and franchises, or buy rights to existing ones in a bid to outgun each other for subscribers. We have seen a lot of high octanes, action-filled movies and shows lately from the likes of Netflix, HBO Max, Prime and others. It has become a rite of passage for a streaming service to have its own superhero-themed sci-fi movie or show. Well, this makes sense considering the massive success of the Marvel Cinematic Universe (MCU) which doesn’t seem to show any signs of slowing down with Wandavision and Loki racking up more numbers for Disney Plus.

Enter The Tomorrow War, an original by Amazon. This is a movie starring Chris Pratt who has developed a penchant for playing a quirky regular guy who ends up being a hero after seemingly being the only person who can resolve a particular issue in a movie plot. See Guardians of The Galaxy and Jurassic World if this is lost on you. Pratt plays Dan Forrester, an ex-serviceman who is now a high school teacher and a family man. Kindly note that I will try to keep this as spoiler-free as possible. The movie opens up with a football game being interrupted with a flash of bright light, which felt like going to be the onset of an alien invasion but rather a visit from humans from the year 2050. The world is under attack from aliens and the only way out for people of the time was to travel to the past to recruit people to help fight in the war. Now, most of the movie begins to write itself into a corner; right from the beginning. With time travel as a tool, the more logical choice would probably be to find a point in time right before the enemy attacks and go back to that time and eliminate them before it all begins. I am not going to go into the problem and paradoxes of time travel that comes to play at this point as I am no Stephen Hawking. Time travel is a very complex thing to include in a movie plot and almost always makes a movie or show fall apart at the seams. Back To The Future did it slapstick style. Predestination, Umbrella Academy and Interstellar may have done it quite nicely, trying to obey the laws of physics whereas Avengers Endgame took it to the extreme by slapping the word “quantum” in front of everything we could think of. This movie does not do that. You need to be high on suspended disbelief to continue watching after the 20th minute. Recruitment begins with Dan being drafted as expected along with other civilians into the war being fought in the future against aliens hence the name “The Tomorrow War”. The soldiers from the future set up a base for this purpose beaming new recruits to and from the year 2050. The movie’s depiction of the future does not quite cut it for me as a sci-fi fan. Where are all the flying cars? The phasers and blasters? The anti-gravity aircraft and protein depolarizing ray guns? Expect to see none of that here but just a grisly landscape of Miami in flames (once again alien invasions happen only in America). The creature designs are one refreshing part of the movie. It is a new take based on old tropes. A horde made up of male aliens protecting or being led by a queen and living in hives or nests. We have seen this in several movies, most notably the Alien franchise. The creatures are beautifully horrendous to look at, almost like something H.R. Giger or John Carpenter would come up with. Not surprisingly they were designed by Ken Barthelemy who has worked on projects like The Maze Runner and The Predator and draws inspiration from H.R. Giger himself. There’s a part of the movie where the recruits are told that they are not to see what the aliens look like otherwise, it would dissuade them from fighting. We get the first glimpse of them after the 40th minute and I must say yeah the recruiters were right.

They are very feral in nature, agile and difficult to kill, almost like what we see with the velociraptors in Jurassic World. The action quickly builds up from that point till the third act of the movie with new plot details keeping the viewer interested. Do not expect to be wowed anyway. I did mention something about suspended disbelief early on. Kindly stick to that. My popcorn started running out as I was being given what I was there for; mindless shooting from both sides and a lot of character deaths. The movie explores the origin of the aliens in a concept almost similar to what was being toyed with in Pacific Rim and Godzilla vs Kong. The B plot of this movie involves themes on family that Dominic Torreto would be proud of. JK Simmons plays Dan’s dad and Yvonne Strahovski plays Murri Forrester, his daughter.
The final part of the movie shows a full-on confrontation between Dan and his team with the alien queen and her minions. This part is probably my biggest problem with the movie as the writers employed the law of conservation of ninjutsu here. Armies of soldiers with attack helicopters and high calibre turret guns were unable to take these creatures on but we see Dan being able to go toe to toe with them Rambo style in the end. Give me a break. Dan’s dad fighting along with him probably brings some redemption to this arc. The action here is tongue in cheek and has funny moments and one-liners. Still fun to watch honestly if you still have your glass of disbelief close by.

What are my final thoughts? The Tomorrow War is definitely not Edge Of Tomorrow, another movie with a similar concept starring Tom Cruise. It is by no means War of The Worlds, also starring Tom Cruise and tentacled aliens. It does try to carve its own identity but is forgettable in most parts and is not going to be a source of meme material. Stream it if you have time to kill.