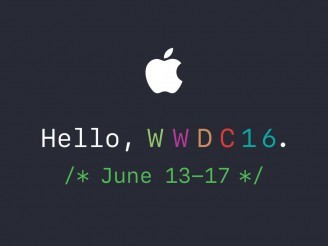 Every year, Apple holds a conference dubbed the World Wide Developer Conference (WWDC). This is where the corp showcases its new (or so it thinks) software and technologies to devs and the world. This year’s edition started on yesterday and will end on Friday. Unfortunately, there were no new hardware announcements but here is a quick roundup!

I’m not very big on wearables but watchOS 3 made some sort of an impression on me. First of all it’s a massive upgrade from the clunky and slow watchOS 2. Apple says watchOS 3 is 7X faster than watchOS 2! Even during the demo of watchOS 3, it was significantly faster than the previous watchOS. In addition to speed, your Apple watch can now transcribe handwritten scribbles into text. This will be very useful when replying to emails and text messages. “Scribble,” as they call it, can recognize Mandarin and English. In the future, I expect other languages to get support.

What’s more, there’s an option to pin prefered apps to a dock. This dock is accessible by clicking the side button on the side of the watch. The Apple watch’s Health game has also been stepped up. You can now dial 911 from your watch when you’re in an emergency by long pressing the side button for some seconds. Emergency services and other information entered into the Health app on your iPhone can also be accessed with the watch.

The operating system software that runs on the Apple TV hardware has also seen some updates. It was mentioned that there are now some 6,000 native apps for TV (Apps on a TV? *Cleans the dust from my Cathode Ray Tube TV). You can completely ditch your TV remote and install an app on your iPhone to serve the same purpose. Also, no more frequentative signing in to all the TV apps you own — tvOS 10 allows you to perform a single sign in.

I was rooting for the next iteration of iOS to be called ‘iOS X’ but sadly that did not materialize. That being said, let’s look at the updates changes to Apple’s iOS:

Okay, I forgot; it is now open to developers, so that’s nice

(Disclaimer: I may or may not be bitter because iMessage is not coming to Android soon)

With all the ‘innovation’ the iMessage app borrowed from Facebook Messenger, I wonder why the app didn’t get renamed to iMessenger

I simply cannot conclude this keynote roundup without mentioning Bozoma Saint John, the Ghanaian-born Apple Music VP who was arguably the most interesting character during the keynote. She completely owned the stage and even attempted to get a room full of white nerds rapping. She concluded her address by playing “Yε wo krom”, a song by Ghanaian artiste Atom. “Yε wo krom” loosely means “We are a force to reckon with”, making it a perfect outro song for #BadAssBoz.

‘Y3 wo krom’ was featured in Apple’s #WWDC2016 ! @AtomReloaded pic.twitter.com/mBhzOoSQfe

Apple is pushing its Swift programming language forward with a new app. Called Swift Playgrounds, it’s an iPad app designed to teach people to code. Simple and intuitive, Apple hopes it will make coding accessible to millions of kids around the world who don’t yet code, but might want to learn. Swift Playgrounds will ship later this year, and Apple is making it available for free.